OBJECTIVE: For UNM Chicano Studies to remove the idea of “Black Olmecs” from their Conexiones Veracruz program.

HOW YOU CAN PARTICIPATE: First, SIGN OUR PETITION! Then, contact UNM and express your concerns! Use the letter below as a template for drafting your own, personalized letter. Tweet this page to the accounts listed below. We have listed the relevant e-mails and social media cotacts on the bottom of this page.

UPDATE: In response to our concerns, UNM has revised the program description for Conexiones Verzacruz. While on some levels this can be taken as a victory, the revised statement is not without its issues:

Here is the original statement:

And the revised version:

So, what is the issue? Noted skeptic Jason Colavito recently blogged about it. Click HERE to read his analysis.

In short, our job is not done yet!

OUR POSITION:
An open letter to the University of New Mexico and UNM Chicano Studies,

It has recently come to our attention that UNM Chicano Studies is promoting a program called Conexiones Veracruz, which takes students to Mexico in order to study the legacy of Afro-Mexicanos. While this is certainly a worthwhile endeavor, we are concerned that the idea of “Black Olmecs” is being included in the program. The idea of “Black Olmecs” is the unfounded notion that Mexico’s earliest civilizations and its people were either directly influenced by, or were themselves, black Africans. By including the notion of “Black Olmecs” in the Conexiones Veracruz program, UNM Chicano Studies is endorsing pseudohistorical views grounded in racial fantasy and bad scholarship.

The flyer for the event (which can be found below) bears the headline “Exploring the African Presence in Mexico,” set against an image of an Olmec statue. The obvious implication of this image is that the Olmec statues represent an African presence in ancient Mexico. To further drive this point home, the flyer goes on to state that the trip “explores African presence in Mexico in three different epochs; Olmec, colonial slavery and contemporary struggles of newly nationally recognized AfroMexican communities.”

Such claims regarding the Olmec are the result of outdated racial worldviews held by early European writers, many of whom never set foot in the Americas, combined with the Afrocentric ramblings of pseudoscholars such as Ivan Van Sertima and Clyde Winters, none of who are Mesoamerican specialists. The idea of “Black Olmecs” is rooted in pseudohistorical revisionism and is not accepted by legitimate Mesoamerican scholars. It should be made clear that no archaeological, faunal, floral, genetic, or historical evidence exists to support the myth of “Black Olmecs.” In fact, scholars such as Gabriel Haslip-Viera, Warren Barbour, and Bernard Ortiz de Montellano have published extensive research debunking the myth of “Black Olmecs.”

Proponents of this myth base their conclusions on superficial interpretations of the famous Olmec heads of Veracruz. These statues, they claim, bear resemblance to Africans based on their broad noses and thick lips. The fact that the statues also resemble Mexico’s Indigenous people (along with the fact that broad noses and thick lips are not solely black African characteristics) is simply ignored, a dismissal that is frankly a bit racist.

We certainly agree that the history and legacy of Afro-Mexicanos have been ignored for far too long, but it is a history that began in the 16th century, not before. Promoting the idea that the Olmec were black is at best poor scholarship, and at worst a racist erasure of Indigenous Mexicans and their accomplishments. Africa and Mexico are both home to fascinating civilizations, each with their own advancements in technology, linguistics, agriculture, and science. When we embrace the pseudohistory of “Black Olmecs,” we trivialize and marginalize the legacies of both Africans and Indigenous Mexicans.

We ask that the Conexiones Veracruz program and UNM Chicano Studies discontinue its promotion of “Black Olmecs,” and focus instead on an accurate and far more meaningful telling of the Afro-Mexicano legacy. Certainly, we can recognize the heritage of Afro-Mexicanos without promoting a distorted and fantastical version of history.

They deserve as much.

Concerned Archaeologists and Historians of Africa and Mesoamerica 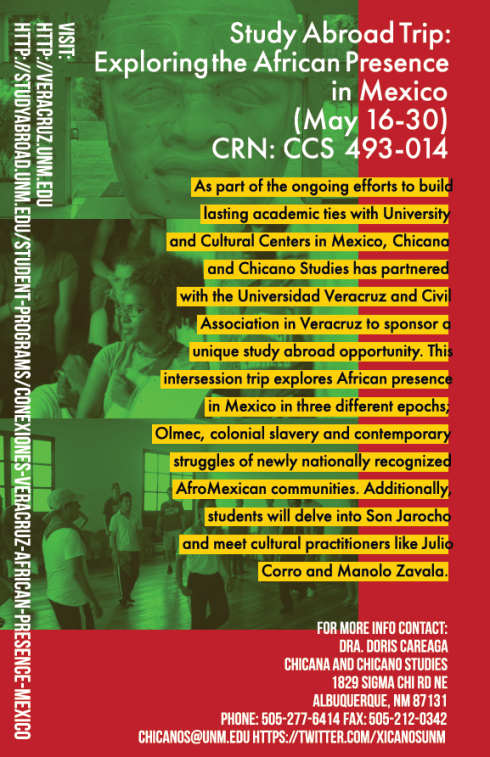 Images for your social media: 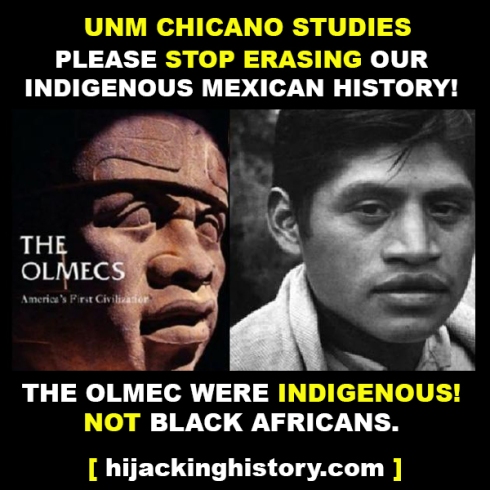